Things are progressing nicely, but first, some interesting news.  We are in discussions with the good folks at Renesas with regards to some fun and nerd-alicious aspects of the Electric Studebaker.  Renesas is a huge microprocessor manufacturer (huge company, not huge micros). I attended a great meeting with them today and met a bunch of nice folks.  Why not keep going to the extreme eh?  Let's put her on the IoT (Internet of Things).  Updates to follow. 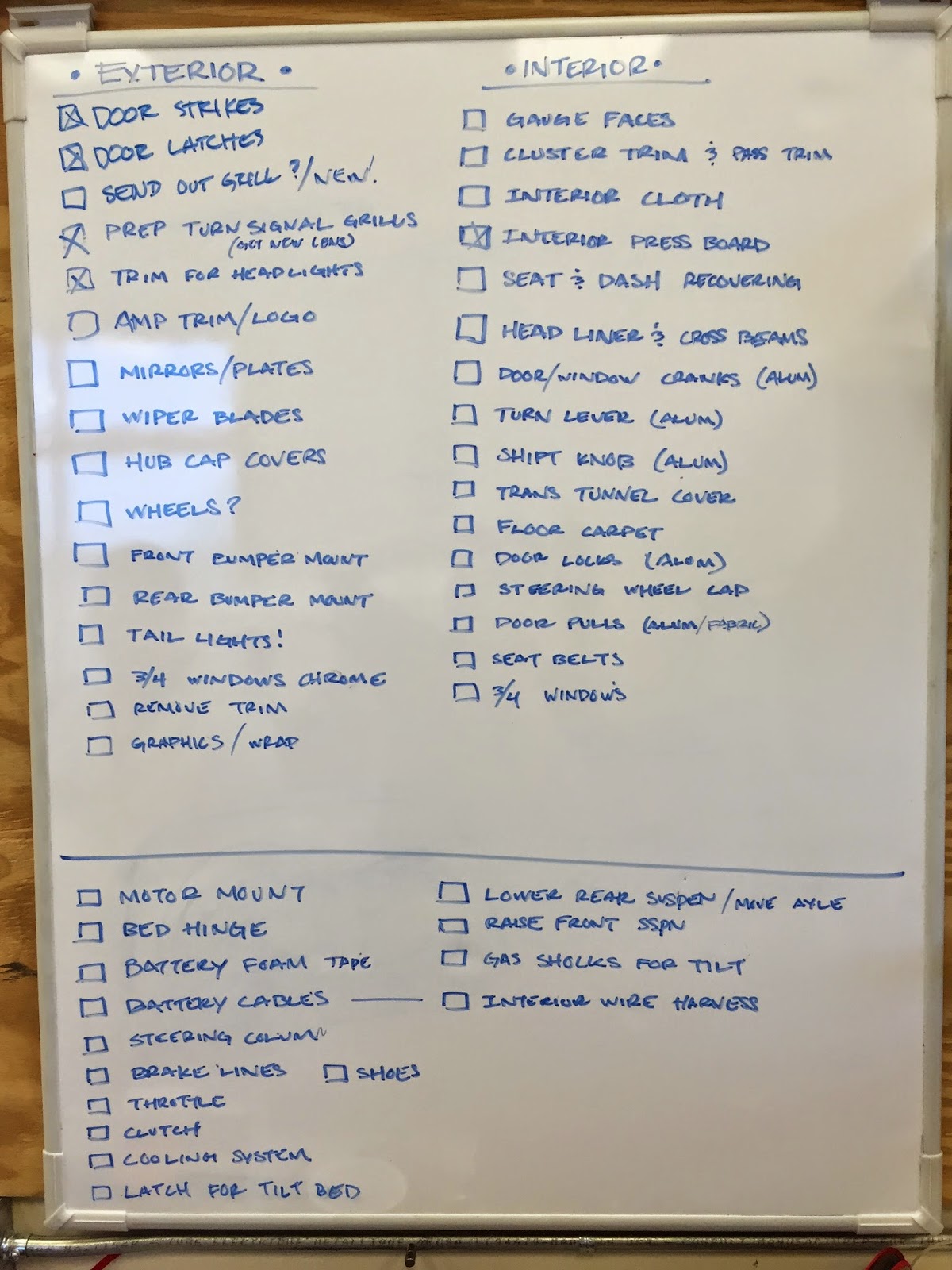 In the mean time, back at the ranch, things are pulling together.  We have our work cut out for us, but it all seems achievable in the next 25 days.  (On the road in May!).

Jason has started a list.  As soon as everything is X'd out, I guess we're ready to go. 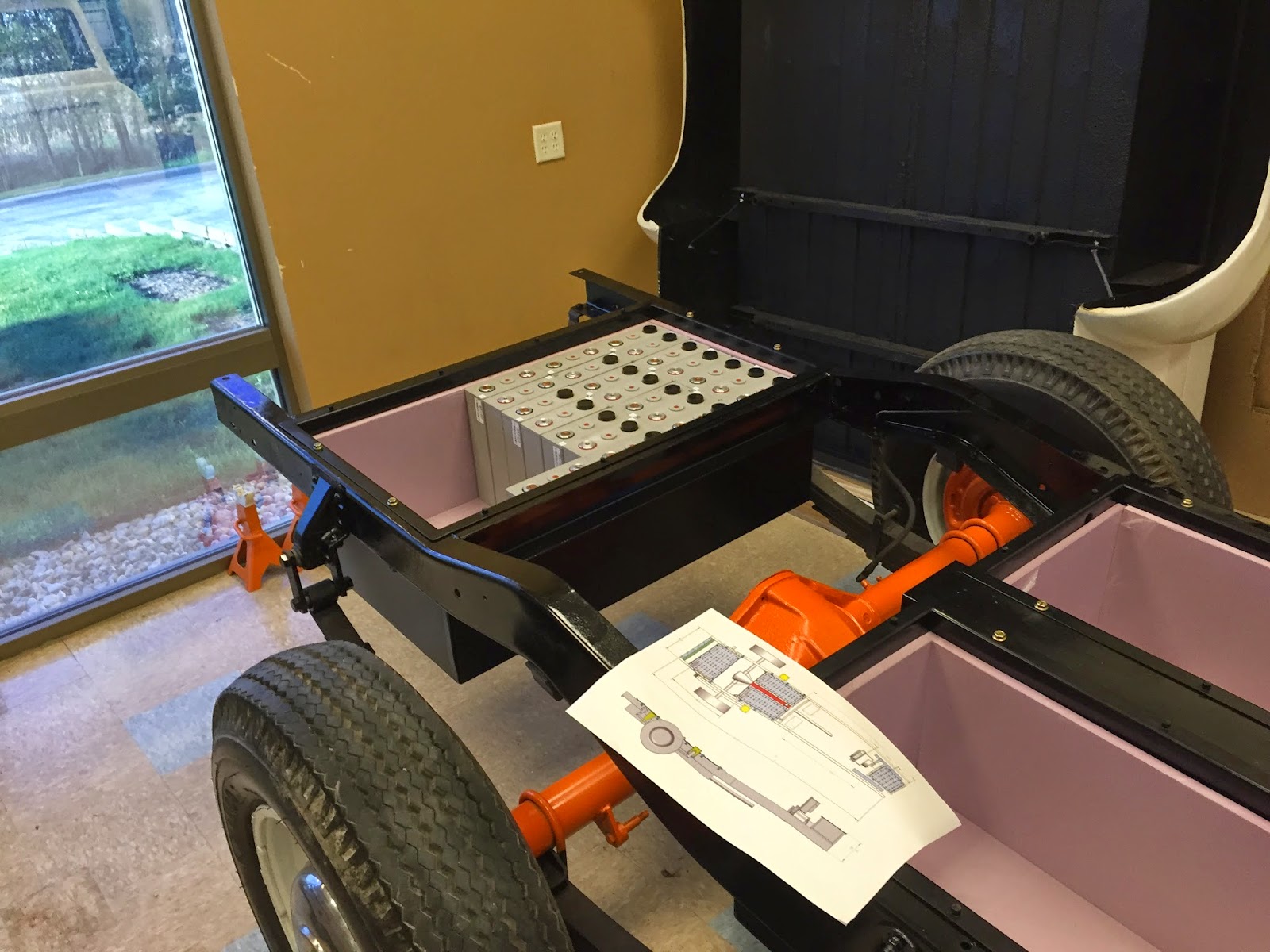 Jesse has been doing an extraordinary job on the truck during the last few weeks.  He has rebuilt the differential and painted the frame and differential (note the orange!).  Then with the help of Greg, the battery boxes are now installed and ready to take batteries. 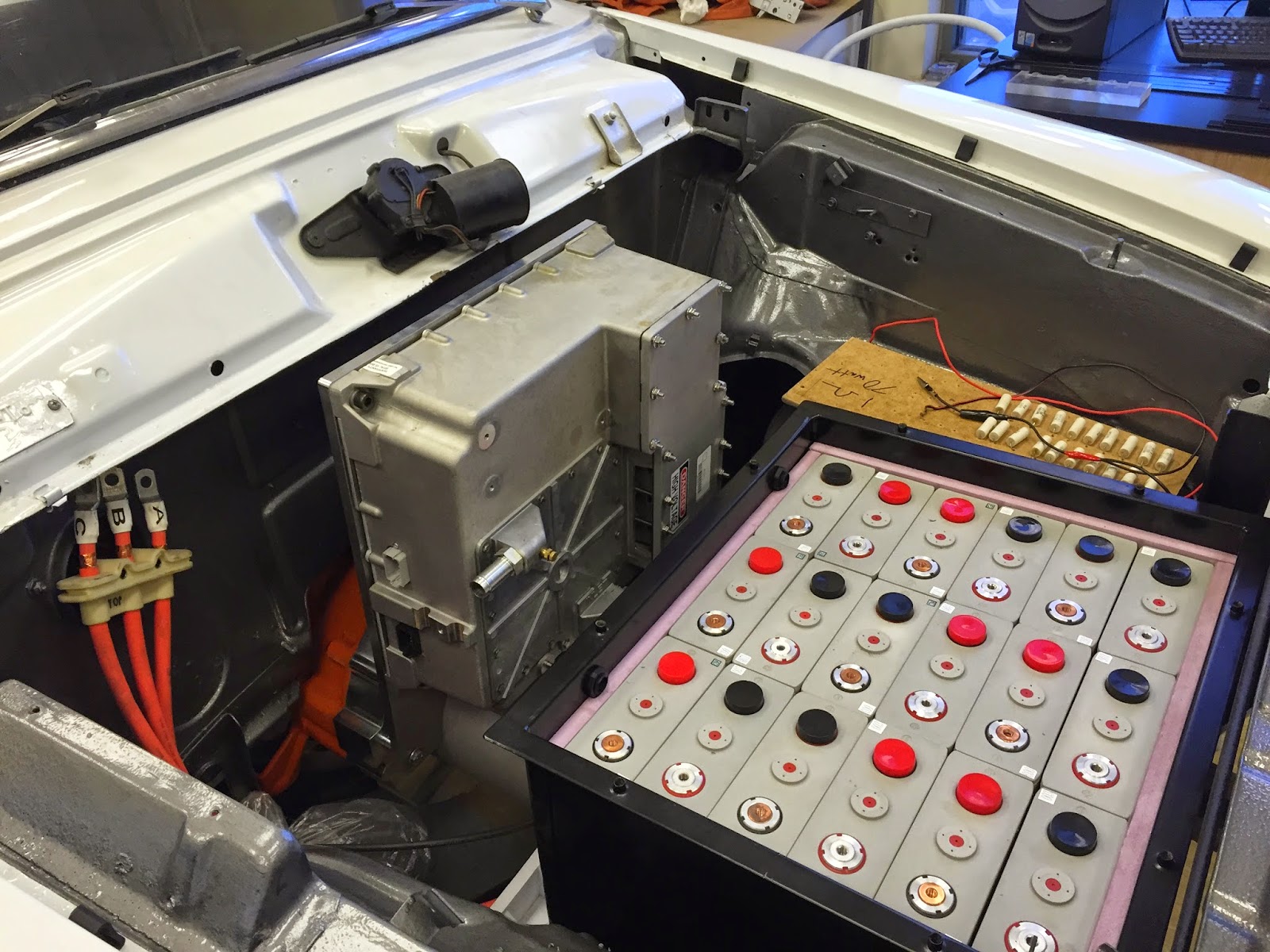 Here are the front (left) and rear (above) battery boxes.  Additionally, Greg has finalized the mounting of the motor controller.  It's the box just left of the batteries in this picture.

Now Peter is in process of plumbing the cooling system 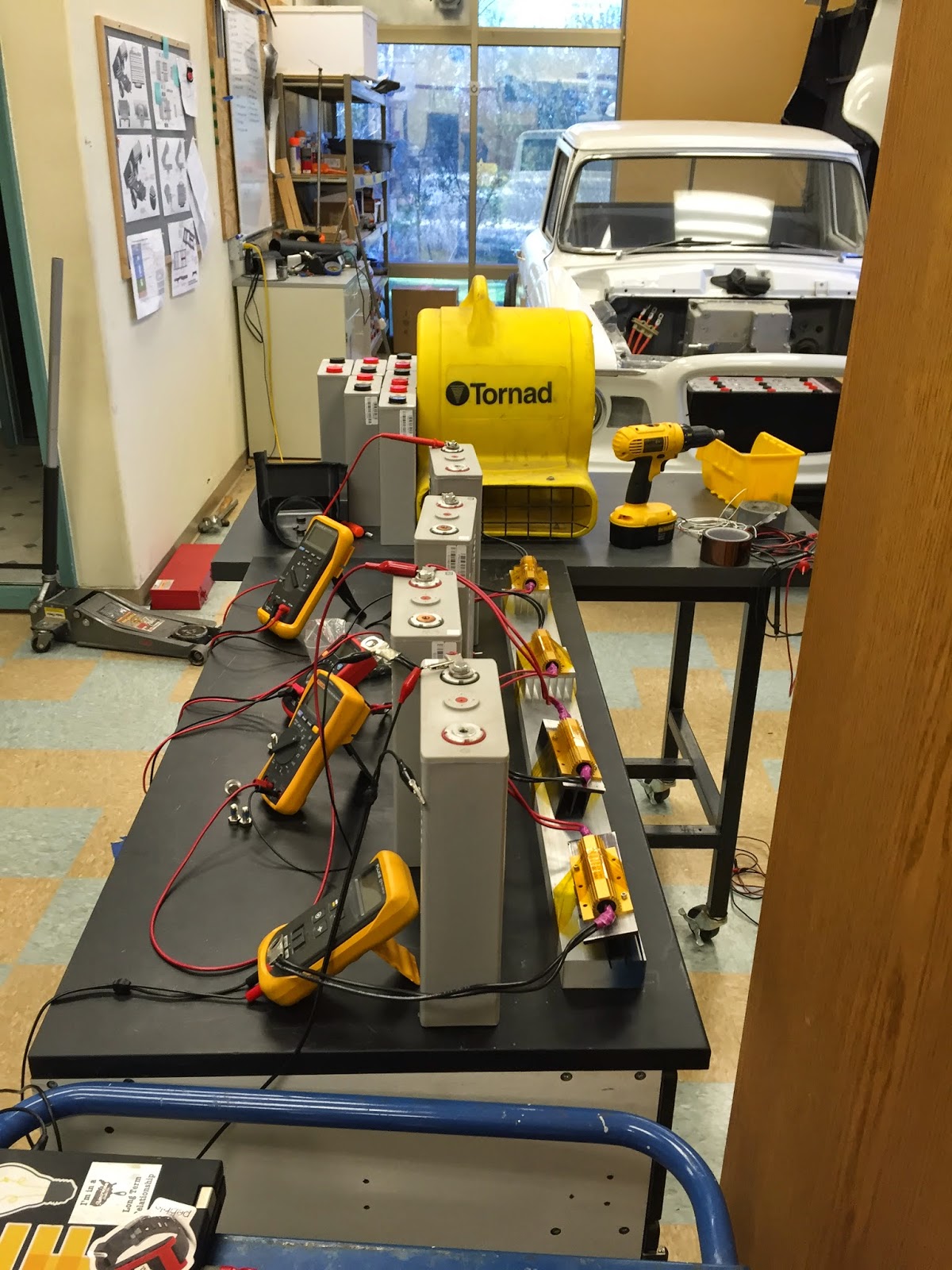 Another big job that Jesse has tackled is to bottom balance the batteries.

He is hooking each battery to a power resistor (the gold thing on the right side of the table) and dumping the power into it.  They get very hot, hence the fan. The idea is to drain all of the batteries to the same exact point.  That way when they are charged, they all get an equivalent charge.

This is a tricky (and somewhat controversial) element of EVs.  We are ascribing to the EVTV method which they have had very good luck with (and no fires).  Here is a very good article for those interested. 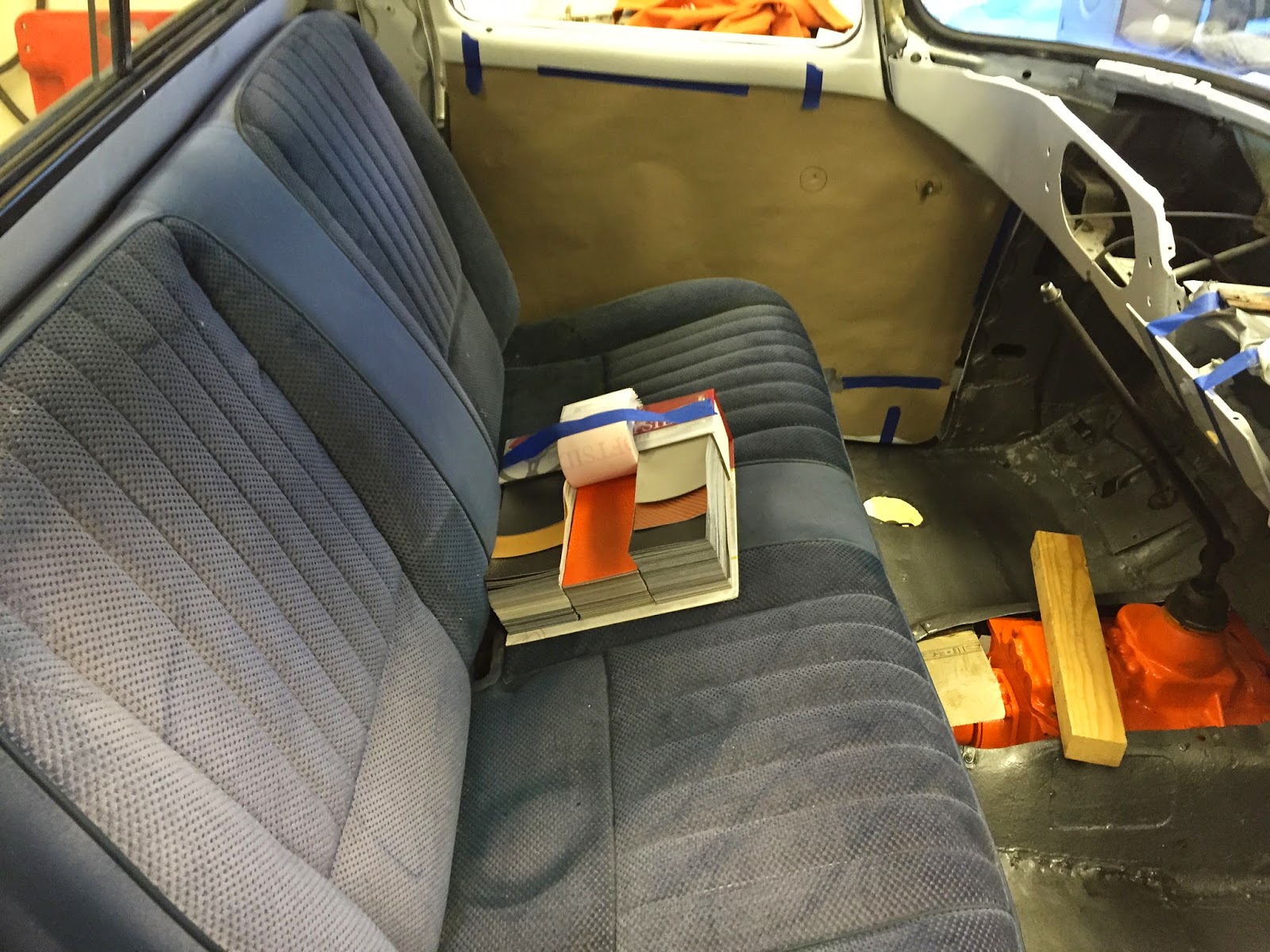 And, to end the post, Jason and Rob have been working on several aspects also.  They found a new seat.  Surprisingly, there were two (!!) Champ pickup trucks at the junkyard where they found the seat (both very bad shape, one with a tree growing through it).

I'm pushing them to finish and they are cranking hard.  We're going to be on the road in May boys, new seat or not.

On the other hand, there is a good chance the old girl will be going to California in October, so she'd better look like a movie star!